Shopping Cart
Your Cart is Empty
Quantity:
Subtotal
Taxes
Shipping
Total
There was an error with PayPalClick here to try again

Thank you for your business!You should be receiving an order confirmation from Paypal shortly.Exit Shopping Cart

The 3 Martyrs of Vilnius, Lithuania

I recently went to Lithuania to be part of one of the ceremonys of The 3 Martyrs. It is reported that Miracles happen around these relics, reports similar to Lourds, in France. You will see on the right a picture of The 3 Martyrs, the one on the right has feet pointing down, he was the one who had his ankles broken during the torturing he endured, while the Pagans were trying to get them to renounce thier beliefs in Christianity. 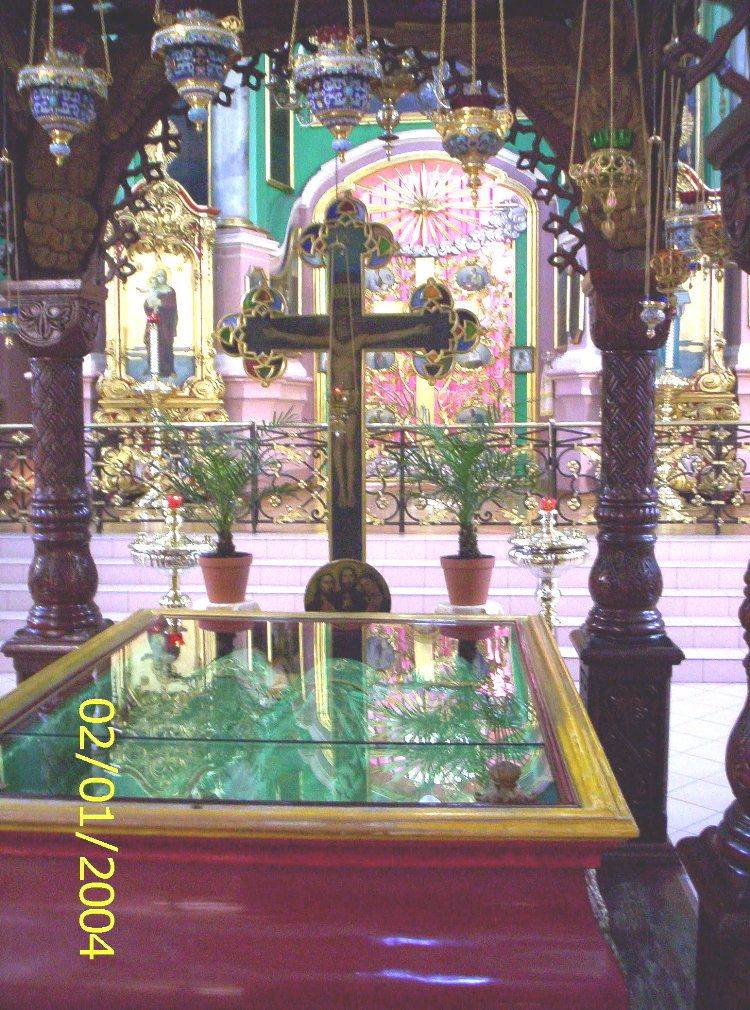 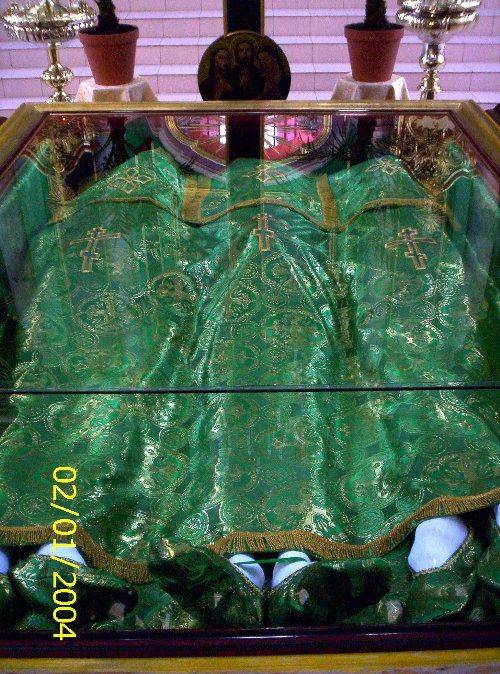 See the whole story below. It will take a while to read through but I believe it will amaze you! The bodies have never been preserved, they seem to have been mysteriously preserved by God.

This is the whole story!

The Holy Martyrs Eustathius, Anthony, and John were brothers who suffered for Christ under the Lithuanian Great Prince Algirdas (1345-1377). The prince was married to the Orthodox Princess Maria Yaroslavna (+ 1346) to increase his territory. He permitted the spiritual leader of Father Nester to teach orthodox religion in the pagan Lithuania and allowed a number of temples to be built  two in Vitebak and one in Vilnius (named after St Martyr Pareskeva). He was baptised and during his wife's lifetime he allowed the preaching of Christianity.

Nestor even converted two noblemen who were brothers, (formerly Lithuanian pagans, in the princes court) Nezhilo and Kumets who received the names Anthony and John. And at the request of Maria Yaroslavna an Orthodox church was built at Vilnius (Vilna).

After the death of his spouse, Prince Algirdas (pressed by the Lithuanian pagan priests, who had great influence on the nation) began to support the fire-worshippers, who persecuted all Christians. Sts John and Anthony endeavoured not to flaunt their Christianity, but they did not observe pagan customs. They did not cut their hair as the pagans did, and on fast days they did not eat forbidden foods.

The prince soon became suspicious of the brothers, so he interrogated them and they confessed themselves Christians, he demanded that they eat meat (it was a fast day). The holy brothers refused, and the prince locked them up in prison. The brothers spent an entire year behind bars. John took fright at the impending tortures and declared that he would obey all the demands of the Great Prince. The delighted Algirdas released the brothers and brought them to himself.

But Anthony did not betray Christ. When he refused to eat meat on a fast day, the prince again locked him up in prison and subjected him to brutal tortures. The other brother remained free, but both Christians and pagans regarded him as a traitor and would not associate with him.

Repenting of his sin, John went to the priest Nestor and entreated him to ask his brother to forgive him. "When he openly confesses Christ, we will be reconciled," Anthony replied. Once, while serving the prince at the bath, St John spoke privately with him about his reconciliation with the Church. Algirdas did not display any anger and said that he could believe in Christ, but must conduct himself like all the pagans. Then St John confessed himself a Christian in the presence of numerous courtiers. They beat him fiercely with rods and sent him to his brother in prison. The martyrs met with joy, and received the Holy Mysteries that same day.

People went to the prison to see them, crowds of people would come to the cellar to see the fearless confessors. People were so impressed by the strength of them and their spirit despite the difficult conditions of imprisonment that many of them decided to be christened and the brothers converted many to Christ by their preaching. The prison was transformed into a Christian school. Seeing this, the pagan priests smelt danger; they started demanding that Algirdas punish the saints to death and thus block the way to the spread of Christianity in the nation.

The Great Duke submitted to the demands of the pagan priests but at first he decided to put to death only St Anthony, hoping that St John will again refuse Christianity. The night before the ordeal St Anthony stayed praying and thanking God for the grace of sending him a martyrs death and asking Him to strengthen his brother in the future trials. He felt that John would be dead soon and advised him not to reject his belief and face would-be torturers without fear.

On the morning of 14th April (27th April according to the new style) of the year 1347 both martyrs received Holy communion, after that St Anthony was taken to the place of execution, the pagans hung him on an oak tree.

St John remained strong in his Christian belief and continued to preach to the people who would gather at his place of imprisonment. Pagans were furious and killed him, first he was strangled and then, being dead already, he was hung on the same oak tree on 24th April 1347. It happened just as his brother St Anthony had predicted before his death; the Christians duly buried the bodies of the martyrs in St Nicholas church. This oak, which the pagans considered sacred, became truly sacred for Orthodox Christians.

The martyrdom of the Saints Anthony and John bore blissful spiritual fruit, their cousin, Kruglas also serving in the court of Algirdas, was shocked and impressed by the strength of the martyrs. He decided to become a Christian and was baptised as Eustachius by priest Nestor. Kruglas stood out because of his comeliness, valour and bravery, but even more because of his mind and virtue of soul. A favourite of Algirdas, he could count on a very promising future. He was young and handsome, strong and brave but even more amazing was his cleverness and kind soul, after the baptism he started practicing Christian life and kept to the rules of the Russian Orthodox Church.

Once the Grand Duke, who loved the young man very much, noticed that he had let his hair grow long, he questioned him about whether he had become a Christian, to which Eustachius openly confessed and would not eat meat because of the Nativity Fast.

This statement made the Grand Duke very angry, with the aim of drawing the boy from his beliefs he started insisting that he ate meat. This happened on Friday before Christmas and the saint martyr refused to obey. Then Algirdas gave an order to beat him with iron sticks, but saint Eustachius bore the torture in silence only thanking God and praising Him for His Grace that he was so kind as to let him suffer for His Holy Name.

The furious duke ordered to take the naked Eustachius to the cold yard and pour icy water into his throat. His body turned blue in colour because of this trial, sometimes his breathing stopped, but this torture he bore with the help of God. Mad with rage Algirdas ordered to break all his bones from the feet up to his knees, to tear off his hair together with the scalp, cut off his nose and ears. This torturing lasted 3 days. St Eustachius was counselling the Christians who were crying, looking at his martyrdom, with the words Dont cry for me, brothers, or for the destruction of this earthly dwelling for my soul, since very soon I hope to receive from God a place made not by human hands in Heaven.

St Eustathius endured the torments with such gladness and courage, that the very torturers themselves were astounded by the divine power strengthened by God, St Eustachius despite his broken feet and legs, walked to the place of execution bravely; they were astonished by the miracle. He was hung on the same oak where Sts John and Anthony received a martyr's death (December 13, 1347).

His noble body was left hanging close to the ground so that wild beasts and birds could eat it. For three days no one was permitted to take down the body of the martyr, not a single bird or beast touched his body since a pillar like cloud descended from the sky and embraced it, seemingly to protect it. After 3 days the remnants of St Eustachius were buried in the Church of St Nicholas, next to saint brothers Anthony and John.

A church was later built on the hill where the holy martyrs suffered. The trinity of venerable passion bearers glorified the true God worshipped in the Holy Trinity; Father, Son and Holy Spirit. The church was dedicated to the Most Holy Trinity. The altar table was built on the stump of the sacred oak on which the martyrs died.

Soon their relics were found to be incorrupt. In 1364 Patriarch Philotheus of Constantinople (1354-1355, 1364-1376) sent a cross with the relics of the holy martyrs to St Sergius of Radonezh (September 25). The Church established the celebration of all three martyrs on April 14. The deed of the saint martyrs was significant to the whole of Lithuania; Prince Algirdas himself not only returned to Christianity but also became a monk at the end of his life. All his 12 sons were Christians, in the end of the 14 century; half of the population of Vilnius was Russian orthodox.

Later, in the following centuries, the remnants of the holy martyrs Anthony, John and Eustachius were famous because of many miracles. However, even after their martyrdom, their remnants had to undergo many hard periods, there was a time when their bodies were laid hidden in a cellar for more than 150 years, in 1826 they were again authorised by high orthodox officials and open to the population.

In 1918, before the attack of the Germans, these holy remnants, as the most prodigious relics of Orthodoxy, were taken to Moscow. The sad memories of saying farewell to the holy martyrs and happy moments when the remnants of saints Anthony, John and Eustachius were again greeted and solemnly brought to Vilnius to the monastery of the Holy Spirit in 1946 are still alive in the minds of older believers of this city. The holy martyrs were of immense significance for the entire Western frontier. Vilnius's monastery of the Holy Trinity, where the holy relics are kept, became a stronghold of Orthodoxy on this frontier and the date of their return  13th (26th) July  is celebrated in this monastery every year.